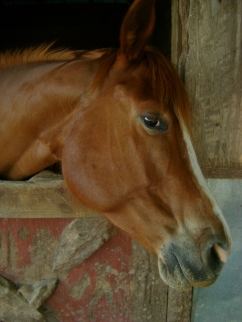 I’ve been living a nightmare for three weeks.

It sounds a bit dramatic to say it like that, but it’s how I feel, so I have to be honest. On April 10 I lost one of my best friends, my beautiful horse Angel. I’ve had Angel for twelve years and expected to have her at least half a dozen more. She was still relatively young at twenty-one and in excellent shape. But horses are sensitive animals and sometimes they get sick and there isn’t anything you can do about it.

I’ve been living in a fog since that day, not quite able to get my footing. My sleep has been thrown off, my thoughts jumbled, and my body exhausted.

And then, only three weeks later, on May 2, another devastating blow has rocked me again. Another horse, this one only sixteen, became suddenly sick. After driving her two hours to the closest equine hospital and trying to save her life, we had to say goodbye. It was another freak accident, nothing that we could have done would have saved her, but that offers little comfort.

Horses are giant, sensitive animals. We’ve been lucky in our time as horse owners to have very few serious accidents or sicknesses, but it looks like our luck has run out. It feels like disaster is hanging over my head, ready to crush me at any moment.

I’m trying to be positive, but it’s a difficult task. Sometimes these things happen and there is nothing that can be done, but that doesn’t make it any easier to manage. I’m trying not to be too hard on myself, because I know this will take a long time to come back from. I’m not sure that I will ever completely be the person that I was, but I guess no one ever is after something like this.

I’m just trying to find my way to a new normal.